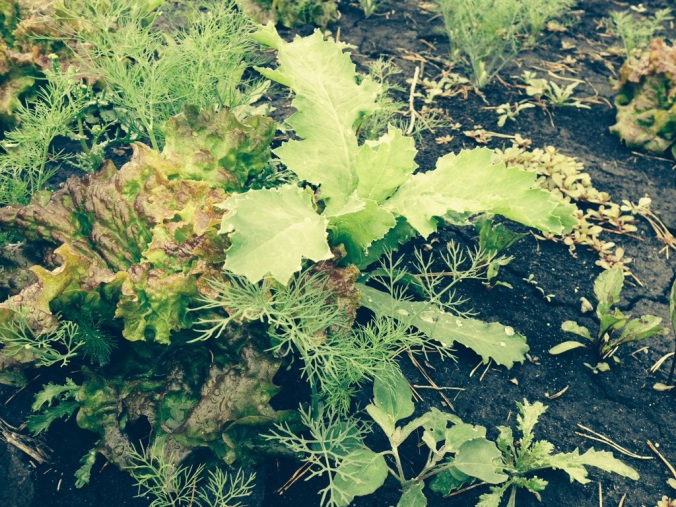 One might say that a weed is any plant growing where it is not wanted. By this definition, most of this season’s CSA offerings have been weeds – though I prefer to call them volunteers. These are plants we grew last year that went to seed in the garden (often because we were wanting to save the seed, either for ourselves or for sale through Prairie Garden Seeds) and sprouted up first thing in the spring. They are usually at least a couple of weeks ahead of the newly seeded plants.

The spinach, radishes, lettuce, orach dill, cilantro, and green onions you have been enjoying all fall into this category. (The photo above highlights volunteer lettuce, dill, and a poppy.) Without these volunteers, the June garden offerings would be confined to the two prime edible prairie perennials – rhubarb and asparagus – plus whatever storage veggies were left from last season (this year, carrots) and a few snippets of herbs from our bedding plants.

Now, with this year’s plantings coming up and the more pernicious weeds beginning to flourish among the volunteer beds, it is time to start tilling them up and planting something else in that spot. But not without great appreciation for the weeks of culinary delight these volunteers have provided early in the season!

2 thoughts on “The Wonders of Volunteers”